The heavy rain that descended on Wiltshire’s Castle Combe Circuit on the morning of the 28th September did little in dampening spirts of the thousands of Mini enthusiasts who decided to made the scenic venue their home for the day.

The event in question? The 27th instalment of the UK’s oldest and best track-based Mini show – Mini Action Day – a firm favourite on the Castle Combe calendar that always promises to bring an abundance of both classic and modern Mini-based excitement to the 1.85-mile race track and its surrounding grounds.

The sun creeping through the clouds as the morning went on wasn’t the only reason for celebrations this time around, either, with 2019 also marking no less than 60 whole years since the very first example of this much-loved compact car rolled its way off the Longbridge production line all those years ago. And the organisers certainly weren’t going to let this chance to celebrate go unnoticed!

Several stunning examples of Britain’s most-loved little car from each year of production could be viewed in all their glory in the display areas, where in total over 1000 Minis were laid out over countless dedicated club stands.

The event’s main sponsor – specialist parts supplier Mini Sport – also hosted no less than 60 hand-picked ‘Top Cars’ that flanked its capacious stand in the heart of the show – all of which took part in a parade around the circuit itself in the afternoon that created some spectacular sights for onlookers.

Judges also gave out several awards throughout the day, which this year were particularly difficult to select due to the incredibly high standards seen everywhere across the event.

Eventually, the trophies went to:

Out on track, there was the usual mix of jam-packed Mini-only public track sessions, charity passenger laps courtesy of Mighty Minis and Bill Richards Racing, and parade laps where all manner of Mini-based machinery could be seen in action.

Castle Combe Circuit staff would once again like to thank everyone who made this event such a huge success. Stay tuned for news on 2020’s date soon… 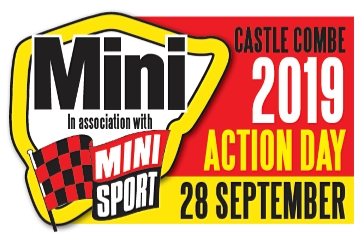