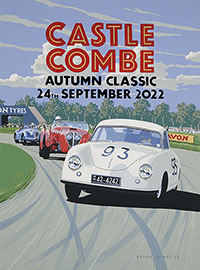 First run in 2012, the Autumn Classic is now firmly established as a must-do date on the classic racing calendar and consistently delivers glorious racing from grids full of cars of the 1950s, 1960s and 1970s.

With plenty of Classic Themed Races across the day and various guest series, all with overflowing grids!

After thrilling duels the leaders have been separated by less than a second in races reminiscent of the early 1950s, when the diminutive 500s often provided the most exciting races of the day. Most of the up and coming British stars of the time, such as Sir Stirling Moss, Les Leston, Don Parker, Ivor Bueb and Jim Russell, then regularly raced such cars at Castle Combe.

Huge grids, pit stops and a massive range of cars, the FiSCaR "50s Inter-marque" two-driver pit-stop race offers it all.

"Keeping the spirit of 50s sports car racing alive" the Fifties Sports Car Racing Club series is for GT and production cars that raced in period.

They are prepared to the same specifications,on period rubber, and close to the way they were in their day. In addition to famous marques such as Aston Martin, Jaguar and Lotus there are also many from yesteryear, such as Jowett, Frazer Nash, Bristol and Triumph.

The fastest cars from this period are undoubtedly the Jaguar D-Types, whilst the biggest class in terms of entries is likely to be the Jaguar XKs (1948-1961) from the JEC's very own successful race series. Also included will be saloons, featuring Jaguar Mk I, II and S Types, and of course the iconic Jaguar E-Types, winners in previous years in the hands of Martin Hunt, Anthony Reid and Grahame Bull.